Are You Legally Protected Against Discrimination Due to Your Marital Status in the State of California?

Are You Legally Protected Against Discrimination Due to Your Marital Status in the State of California?

Home » Blog » Are You Legally Protected Against Discrimination Due to Your Marital Status in the State of California? 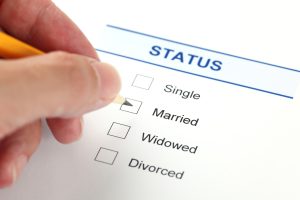 Read on to learn more. If you believe you have been discriminated against or harassed at work due to a protected status, contact PLBSH at (800) 435-7542 for a legal consultation.

According to federal law, is marital status a protected class?

The majority of employers in the US are governed by Title VII, a federal employment statute. It prohibits discrimination at work based on your race, color, religion, sex, or place of birth. The U.S. Supreme Court has enlarged sex discrimination in the workplace to encompass sexual orientation, gender identity, and transgender status, but it does not include marital status.

However, the Civil Service Reform Act of 1978 (CSRA), another federal statute, prohibits discrimination based on marital status. But only federal government employees are covered by the CSRA.

The Civil Rights Act does not include marital status, hence the U.S. Equal Employment Opportunity Commission does not handle claims of marital status discrimination (EEOC). Instead, the Merit Systems Protection Board (MSPB) and the U.S. Office of Special Counsel (OSC) look into those that occur under the CSRA in the federal government.

Is it covered under state employment laws?

Which laws apply in California?

Marital status is a protected class in California. It is a violation of the California Fair Employment and Housing Act (FEHA) to treat you differently based on this. Such bias may manifest itself in one of the following ways: refusing to choose you for a training program that would pave the way for career growth, refusing to recruit you, letting you go, demoting you, laying you off, or treating you unfairly with regard to the benefits, terms, or conditions of your employment, such as not paying you equally.

It may be considered job discrimination if your employer hires you based on your marital status. For instance, it may be discriminatory for a prospective employer to inquire about a job applicant’s plans for marriage, maiden name, spouse’s name, age, religion, or other personal information.

However, if the employer can demonstrate in good faith that the attribute is a genuine requirement for the position, such queries are not discriminatory. For instance, in order to conduct a background check or look into your employment history, companies may request all of your previous names. If the company has a policy to keep spouses and other family members apart in order to avoid conflicts of interest, they may also inquire about your relatives.

Have you been discriminated against due to your marriage? Then contact PLBSH at (800) 435-7542 to get help today.