Are You Surprised to Learn the Most Common Types of Workplace Harassment in the United States?

Are You Surprised to Learn the Most Common Types of Workplace Harassment in the United States?

Home » Blog » Are You Surprised to Learn the Most Common Types of Workplace Harassment in the United States? 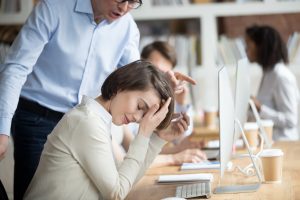 Continue reading to learn more about several of these specific types of discrimination. If you have been the victim of discrimination, contact PLBSH at (800) 435-7542 for a free legal consultation.

Discrimination based on a person’s physical or mental handicap is prohibited by both federal and state anti-harassment legislation. Frequently, this manifests as discrimination, with the employer offering lower pay or fewer benefits, turning down a disabled job application, terminating a disabled employee, or refusing to provide necessary modifications.

Disability harassment can also occur if your superiors or coworkers repeatedly engage in offensive behavior against you.

Racial harassment and discrimination may also give rise to legal action. It may be illegal under both Title VII of the Civil Rights Act of 1964 and California law’s FEHA. Racial discrimination may occur if your employer takes any of the following actions in response to your race or perceived race refuses to pick you for a training program, refuses to recruit you, fires or discharges you, or offers you less job perks or harsher working circumstances.

At work, you can experience racial harassment. A lawsuit may be warranted if unpleasant workplace behavior targets you because of your race and is either severe or pervasive. This encompasses actions and speech, whether spoken, written, or sent through text messaging, such as racial slurs, epithets, and other terminology that is offensive to your race.

Importantly, sexual harassment is unwanted behavior that singles you out for attention due to your gender. If the behavior is directed against other sex-related areas of your body, such as your pregnancy, sexual orientation, or gender identity or expression.

Age prejudice frequently appears in mandatory retirement ages, layoffs that only affect senior-level or older employees, refusal to hire workers who are not young, or inquiring candidates’ ages during the hiring process and subsequently excluding any over 40.

However, age discrimination can also be used to employees over the age of 40. Your age is the focus of this inappropriate behavior, which is serious or pervasive enough to foster a hostile work environment.

If you have been the victim of harassment or discrimination at work, contact PLBSH at (800) 435-7542 to request a free legal consultation with an employment law attorney.