Can an Employer Legally Fire an Employee for Disability-Related Job Performance Issues?

Can an Employer Legally Fire an Employee for Disability-Related Job Performance Issues? 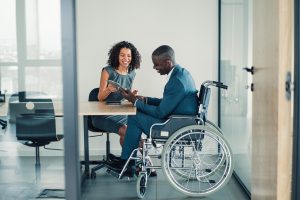 Not only is it unfair to be fired due to performance concerns brought on by a disability, but it’s probably also against the law. In Humphrey v. Memorial Hospitals Association, a federal appellate case, the court held that conduct brought on by a disability is considered to be part of the disability for purposes of the Americans with Disabilities Act rather than a separate reason for termination (with a few exceptions, such as alcoholism or illegal drug use).

For instance, it might be unlawful for an employer to fire an employee for poor attendance if the individual suffers from obsessive compulsive disorder. In the Humphrey case, this happened. Read on to learn more about this specific case and then contact PLBSH at (800) 435-7542 if you believe you have been the victim of disability discrimination and/or have been wrongfully terminated.

In Humphrey, the plaintiff had obsessive compulsive disorder and worked as a medical transcriptionist (OCD). In her case, she alleged that the California Fair Employment and Housing Act and the Americans with Disabilities Act (ADA) were broken when she was fired (FEHA).

The Humphrey plaintiff excelled in her role as a medical transcriptionist. She was praised for her abilities and received glowing performance evaluations all around. However, the plaintiff had obsessive-compulsive disorder, which converted the relatively routine morning rituals of brushing one’s hair and taking a bath into an hour-long agony.

For instance, she might take another shower if she got out of the shower and didn’t like how her hair looked, delaying her morning preparations for work. She was always late because of her OCD. She eventually received a written warning for being late.

The plaintiff requested reasonable accommodations from her employment and provided a doctor’s letter. The complainant requested a different accommodation after the first one proved ineffective: the right to work from home. That would have taken care of the problem of her OCD and her morning tasks making her late to work. According to the evidence in this case, the employer permitted other workers to work from home, but the plaintiff’s request was denied, and she finally lost her job because she had received a written warning for being late.

The company failed in its obligation to make reasonable accommodations, the court said, by forbidding the plaintiff from trying out working from home. The employer has a responsibility to appropriately accommodate the disability when a performance issue is brought on by it, according to the court, and will be held liable for failing to do so.

The FEHA Applies to Everyone

The Fair Employment and Housing Act requires all employers to engage in an interactive process with their employees to identify and implement appropriate reasonable accommodations as soon as they become aware of the need for accommodations. Importantly, the employer acknowledged that allowing the plaintiff to try working from home would not have posed an unreasonable hardship.

It must be proven that the employee’s impairment was the reason for her termination in order to establish an unlawful dismissal claim. In this instance, Ms. Humphrey’s termination by the company was based on her tardiness and absences. Performance problems brought on by a handicap are seen as a component of the disability.

The connection between the disability and termination is especially strong in cases where the employer’s refusal to provide reasonable accommodations for an existing handicap results in discharge due to performance issues brought on by that disability. In conclusion, a jury “might credibly infer the necessary causal link between an OCD impairment and Humphrey’s absenteeism and draw the conclusion that PLBSH terminated Humphrey for her disability.”

In California, it may be unlawful to have been fired due to performance concerns brought on by a disability. It’s crucial to speak with an employment lawyer to learn about your rights if you’re a disabled employee who thinks you were unlawfully fired because of your condition. Contact PLBSH at (800) 435-7542 for help.