Our law firm has a long and rich history in Southern California, encompassing decades of experience, countless victories, and hundreds of millions of dollars in compensation for our clients. Today we are one of the most well-known and well-respected law firms in our area. 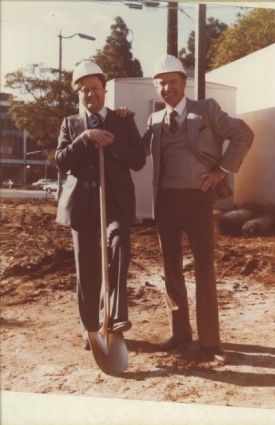 Major Langer (left) and James Perona (right) breaking ground on the site of the Long Beach office in 1981.

Perona, Langer, Beck, Serbin and Harrison was originally established in the early 1960s as Demler & Hosmer, where it concentrated on a number of areas of practice, including insurance defense. During these early years, Mr. Hosmer left the firm to become a United States Representative and Jim Perona joined the firm.

In the 1980s the firm continued to handle some insurance defense work, but turned its attention to plaintiffs’ personal injury and other kinds of contingency fee civil litigation. In 1983 Ron Beck (who had joined the firm in the late 1970s as an associate) became a partner, and the firm began concentrating more heavily on a plaintiff’s personal injury practice, which included auto, premises liability, and land subsidence litigation.

In 1981, we were one of the first firms to successfully represent a group of homeowners in what was known as the Bluebird Canyon Landslide in which insurance coverage was afforded to a number of homeowners for damage to their homes. The firm handled several large landslide litigation cases including what was known as the Abalone Cove Landslide and the Flying Triangle Landslide. The Abalone Cove Landslide involved over 46 homes and was eventually resolved by the County of Los Angeles issuing $10,000,000 of home improvement loans to the area as well as substantial damages to all homeowners. Additionally, the firm began representing approximately 30 homeowners in another landslide called the Flying Triangle Landslide in Rolling Hills, California. Mr. Langer and Mr. Beck were in trial for close to 15 months which resulted in a plaintiffs’ jury verdict and an award of punitive damages. Along with insurance settlements, the total settlement of that lawsuit was approximately $15,000,000.

Throughout the late 1980s and 1990s the firm concentrated its practice on plaintiffs’ personal injury work and general civil litigation. Mr. Langer and Mr. Beck represented the rock group Motley Crue and Tommy Lee and his then wife Pamela Anderson in several high profile cases including motion picture disputes and the infamous sex tape case.

Today, Perona, Langer, Beck, Serbin and Harrison represents severely injured plaintiffs in personal injury cases and has an employment law division representing workers who have claims for wages, overtime, discrimination and harassment. The firm also has a large workers compensation practice representing over 7,500 injured workers. In addition, partner Ellen R. Serbin has developed an extensive appellate work practice and has written over 60 appeals with a number of reported decisions in the State of California.

Perona, Langer, Beck, Serbin and Harrison has a rich history and has even produced a California Supreme Court Judge, David Eagleson. The firm continues to have an extensive serious personal injury practice, workers compensation practice, civil litigation and real property litigation practice, employment practice, and appellate practice. We are one of the few firms in California to primarily have a contingency fee based practice.