Get the Truth: Does an Employer Have to Protect Their Workers from Harassing Customers?

Get the Truth: Does an Employer Have to Protect Their Workers from Harassing Customers?

Home » Blog » Get the Truth: Does an Employer Have to Protect Their Workers from Harassing Customers? 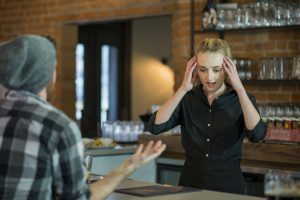 Videos of unsettling occurrences, whether involving police contacts or situations in stores or restaurants, appear to be going viral on a daily basis today. In May 2018, a New York City attorney shouted at two Manhattan deli employees for not speaking English. They went so far as to threaten to call immigration.

For many employees, this poses a critical question: what duty do companies have to safeguard their employees against harassment? The individual in issue was harassing employees based on their national origin and suspected immigration status in this case, but other types of discrimination and harassment may be seen in workplaces across the United States. Companies, according to an experienced employment attorney, have a responsibility to ensure that their workplaces are free of prejudice.

When a client requests that a person of a certain race or national origin not serve or treat them, this is one of the most prevalent kinds of employment discrimination. A similar incident was recently captured on camera in a Canadian hospital, where an enraged woman complained that her son could only see a white doctor.

Employers Can Take Numerous Measures to Deal with the Issue

If a company discovers that one or more of its workers is being discriminated against or abused, there are numerous measures that may be taken to correct the problem. Importantly, if an employer learns of a customer’s harassment or discrimination, it is the company’s obligation to address the problem as soon as possible.

One alternative is to completely eliminate the consumer. Removal may not be possible in hospitals and other medical care facilities. Employers at restaurants and businesses, on the other hand, can and should dismiss customers who are rude to their employees.

Another option would be to prohibit the client from the restaurant if the employer did not learn about the issue until after the event. In the example of the attorney mentioned above, the deli may simply inform him that he is no longer welcome due to his harassment of the deli’s staff.

If the firm determines that it cannot afford to lose a specific client’s business or that it cannot ban or remove the individual in issue, it may accompany the customer on the premises. This will aid in the correction of any harassing behavior while maintaining the business connection.

The Responsibility of the Employer

Importantly, once the employer learns that a customer is harassing its employees, the company is held liable for the acts of that consumer. If the employer does nothing, the employee may be entitled to file a lawsuit against the firm.

This is especially true if the business complies with the customer’s desires, such as exclusively hiring persons of a specific race or national origin. If an employer retaliates against a discriminated-against employee, such as by terminating him or her, the employee may have a legal claim. If you have been the victim of workplace discrimination or harassment and want to know your rights, a knowledgeable employment attorney can assist you.