Pregnancy Discrimination is Far from a Thing of the Past: Learn What Your Legal Options Are in California

Pregnancy Discrimination is Far from a Thing of the Past: Learn What Your Legal Options Are in California

Home » Blog » Pregnancy Discrimination is Far from a Thing of the Past: Learn What Your Legal Options Are in California 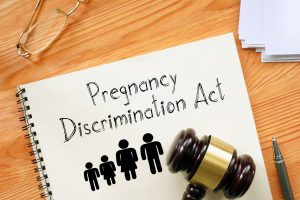 It would seem that sex-based discrimination in 2022 should be unheard of, especially when it comes to pregnancy. However, a recent New York Times piece made clear how widespread prejudice against pregnant people is in the US. Many women are penalized for becoming pregnant despite laws intended to support mothers, such as breastfeeding facilities and improved maternity leave rules.

The federal Pregnancy Discrimination Act of 1978 and other state statutes make it illegal to discriminate against someone because they are pregnant. This hasn’t stopped many companies from treating pregnant women unfairly in a variety of ways. The discrimination may be overt or covert. Keep reading to learn more about pregnancy discrimination and then contact PLBSH at (800) 435-7542 to request a consultation.

The discrimination may be more subtle for employees working for corporations, such as receiving fewer incentives or being passed up for bonuses. Two women talked about how their employers—a major financial institution and a multinational pharmaceutical corporation—demoted or otherwise stopped them from rising when they became pregnant in the New York Times piece.

Both ladies were rising stars in their fields before to having children. Research quoted in the article claims that every kid a woman has lowers her hourly wage by 4%. The same study discovered that becoming a father results in a 6% rise in a man’s income.

Pregnancy discrimination against workers in blue collar professions sometimes entails failing to provide for a pregnant woman’s unique requirements. Because their physicians advised them not lifting anything heavy while they were pregnant, two of the women in the piece asked for light duty. Their bosses declined.

When a third lady started becoming unwell from using the cleaning supplies she was compelled to use, she requested to be given a different position in the business after learning from her doctor that the cleaning supplies’ toxins were making her baby ill. Likewise, her employer declined.

Businesses sometimes prioritize profits over the rights of pregnant women

There are indications that more businesses are prioritizing their profit lines even if the United States has generally become more sympathetic of the requirements of pregnant women. The Equal Employment Opportunity Commission (EEOC) received 3,184 complaints of pregnancy discrimination in 2017. The EEOC now receives about twice as many complaints as it did in 1992, the year it started maintaining computerized data.

It’s significant to note that the number of complaints may actually be low because many women may be reluctant to report workplace discrimination because they cannot afford an attorney, are unaware that what happened to them is prohibited by law, or are afraid of retaliation, particularly if they are still employed by the same company.

PLBSH is adept at assisting clients who have been subjected to pregnancy discrimination as well as other forms of workplace prejudice. We are committed to assisting all of our clients in obtaining justice because we are aware that even more subtle forms of discrimination may have a significant negative impact on a person’s career. Call (800) 435-7542 or send an email to info@plbsh.com to set up a consultation with a skilled employment discrimination lawyer.