Many workers’ compensation cases do not involve traumatic accidents, but injuries that have developed over time due to repeating the same action. 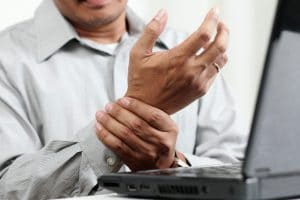 When most people think of a workers’ compensation case, they think of a major injury: a forklift runs over a person’s foot, a chemical burn disfigures a worker’s face, or a machine severs an employee’s finger.  But many workers’ compensation cases are not about severe injuries or disasters at work — and in many cases, the company is not necessarily at fault for the workers’ injury.

Repetitive motion injuries are an example of a type of workers’ compensation claim that can arise in any workplace — through no fault of either the employer or the employee.  Over time, a person could suffer shoulder injuries from repeatedly reaching overhead, back injuries from picking up heavy loads or bending over a table, or (perhaps the most familiar type of repetitive stress injury) carpal tunnel syndrome from typing at a computer.  Whatever the injury may be, a worker may be eligible for compensation if the condition arose or became worse because of their job.

What Are Repetitive Motion Injuries?

Repetitive motion injuries, which are sometimes called repetitive stress injuries or cumulative trauma injuries, are one of the most common types of workers’ compensation injuries. They can occur whenever that a person has to repeat an action or motion repeatedly over time.  Repetitive motion injuries are common on assembly lines, where an employee has to do the same thing over and over again, and also in desk jobs that require employees to sit in one place and type on a keyboard or computer all day.
Carpal tunnel syndrome is a prime example of a repetitive motion injury.  It is incredibly painful, caused by the compression of the median nerve in the wrist.  This nerve passes through a passage of ligament and bones called the carpal tunnel.  This tunnel can swell, compressing the nerve and causing numbness, pain and tingling.  Without treatment, a person’s hand muscles can deteriorate and the person can have difficulty holding or grasping objects or working with their hands.

Workers’ compensation is an insurance system that is designed to pay for lost wages and medical bills for injured employees.  It will also pay for ongoing medical treatment after an employee returns to work. Almost any injury that occurs on the job will be covered by the workers’ compensation system — even if it was caused by the employee himself.

One of the most challenging aspects of getting coverage for a repetitive motion injury through the workers’ compensation system is proving that the injury happened while on the job. Unless accidents, there isn’t a single incident that can be pointed to that shows that an injury happened at work.  A repetitive motion injury claim may require a more detailed analysis to prove that it was caused by the employee’s work.

An employee has to show a connection between their disability or injury and their work activity.  This can be done by presenting testimony from a doctor that the injury was caused by a person’s work. The employer (or his insurer) may present competing testimony from their own medical expert to state that the repetitive motion injury was not caused by on-the-job activities.  That is why it is so important to seek an experienced workers’ compensation attorney to represent you in a claim.

At PLBSH, we are skilled at handling all types of workers’ compensation claims — including those involving repetitive motion injuries.  Contact us today at (800) 435-7542 or info@plbsh.com to schedule a free consultation and learn how we can help you recover for your workplace injury.