What Are Wage and Hour Violations?

What Are Wage and Hour Violations?

Home » Blog » What Are Wage and Hour Violations?

Some types of wage theft are more common than others 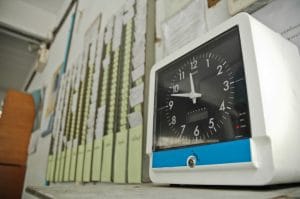 Every day, millions of workers across the United States have their wage and hour rights violated. These rights are established under both federal law (the Fair Labor Standards Act, or FLSA) and state law (California Labor Code). These violations result in what is known as wage theft, when illegal practices cause employees to lose money to which they are entitled.

Under federal and state law, qualified workers in the United States are entitled to a minimum wage (set by the federal government, California, and by individual California counties) and overtime pay of time-and-a-half for any and all hours worked over 40 in one work week. Yet far too often, employers violate these laws in a number of ways.

According to a California employment lawyer, there are six common ways that employers violate wage and hour laws. All of these violations can result in employees losing their hard-earned money.

First, many employers fail to pay overtime correctly. Under both FLSA and the California Labor Code, non-exempt employees are entitled to time-and-a-half for any hours worked over 40 in a given week. If an employer does not pay overtime — which must be 1.5 times an employee’s regular rate, including commissions and bonuses — then they have violated the law. This can happen in a number of ways, such as shifting hours into a different workweek to avoid paying overtime.

Second, some employers do not pay for off-the-clock work. If an employer expects you to perform work and they benefit from that labor, then it must be counted towards your regular wages and overtime. If they have you do work before clocking in or after you clock out, that is a violation.

Fourth, some employers take illegal deductions from an employee’s paycheck. Employers can take deductions from employee paychecks for items like uniforms or tools — unless these deductions cause the worker’s hourly rate to fall below the minimum wage. In that situation, the deduction is a violation of wage and hour laws.

Fifth, although employees are entitled to their tips under both federal and state law, there are certain employees who steal tips from their employees. While tip pools (where employees are required to pool their tips and split them equally) are legal in some cases under the FLSA, employers are never allowed to take tips from the pool.

Sixth, although the law is clear about the minimum wage, some employees are still paid less than what the federal government and the state of California require. This is done in a variety of ways, including when a person’s immigration status is in question or when they are working “under the table.” Certain employers may just pay less than minimum wage and hope that employees do not know the law. As of January 1, 2019, the minimum wage in California is $12.00 per hour. The minimum wage is $7.25 per hour under federal law.

If you believe that your employer has violated the California Labor Code or the FLSA, you may have a claim against them. An experienced California employment lawyer can evaluate your case and help you determine what options may be open to you.

At PLBSH, we are skilled at working with employees to help them obtain justice against employers who have treated them unfairly. From wage and hour violations to employment discrimination, we are here for you. Contact us today at (800) 435-7542 or info@plbsh.com to schedule a consultation with a California employment lawyer.