What Happens If My Boss Pays Me Late — Or Doesn’t Pay Me at All?

What Happens If My Boss Pays Me Late — Or Doesn’t Pay Me at All?

Home » Blog » What Happens If My Boss Pays Me Late — Or Doesn’t Pay Me at All?

You may be able to file a legal claim if your employer doesn’t pay you on time. 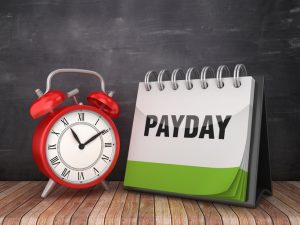 When you go to work, you perform your job with an expectation that you will get paid. After all, few of us would go to work if we weren’t paid to do so. But what happens if your employer doesn’t pay you on time, or if they don’t pay you at all?

The California Labor Code requires most employers to pay their employees at least twice each month, on days that have been designated in advance as regular pay days. A notice must be posted about regular pay days, as well as the time and place of payment. As a California wage and hour attorney can explain, these rules only apply to non-exempt employees. Exempt employees include people who are on a salary, such as white collar professionals.

Any work that employees perform within the first 15 days of the month must be paid between the 16th and 26th day of that same month. Work that is performed between the 16th and last day of the month must then be paid between the 1st and 10th day of the following month. Any overtime pay must be paid no later than the next regular pay date. If an employee is fired, then their final unpaid wages must be unpaid immediately, including both wages and unused vacation or paid time off that has accumulated. If an employee resigns without giving notice, then they are entitled to receive their final pay within 72 hours of their resignation.

If your employer pays you late, or doesn’t pay you at all, then you might be able to file a lawsuit against them. In this type of claim, you can seek unpaid wages and overtime, as well as compensation for hours worked off of the clock and meal and rest breaks that were not provided. You can also recover money for a failure to pay minimum wage and late payment of wages.

A successful lawsuit may result in payment of these late or unpaid wages, as well as attorney’s fees and court costs. If the employer’s failure was not a result of a good faith error, then employees can also seek liquidated damages. According to a California wage and hour attorney, liquidated damages include an amount equal to the unpaid wages plus interest.

Wage and hour cases can be complex, especially if an employer violates both California state law and federal law. At PLBSH, we have experience handling all types of wage claims, including those that involve late or unpaid wages. If you believe that your employer has violated the law when it comes to paying you for the work that you have done, we can help. Contact our law firm today at (800) 435-7542 or info@plbsh.com to schedule a consultation.