Home » Blog » What Is A Hostile Work Environment?

In order for a work environment to be considered hostile, the actions of your fellow workers must be severe — and based on something about you that is protected by law. 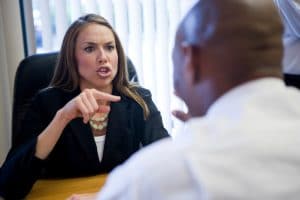 Many employees have heard the term “ hostile work environment” through TV shows, newspapers or other forms of pop culture.  But what exactly does this mean?  Does it mean that you simply don’t like how a co-worker behaves — or is it something more? How can you prove that a work environment was hostile?

A hostile work environment has to be something more than simply not liking how your fellow employees act.  It has to involve severe and pervasive misconduct. To win a harassment lawsuit, these actions have to be done because of something about the person that is protected.  If you believe that you have been harassed at work and are working in a hostile and abusive environment, contact a California harassment attorney to discuss your claim.

While many actions or behaviors can seem hostile, it is only the conduct that is based on a person’s protected status that qualifies.  The actions or communications must also be pervasive, take place over a period of time and severe.

A protected class is any characteristic that the law recognizes as an illegal basis for discrimination.  That includes a person’s age, gender, religion, disability or race.  In some states or localities, it may also include a person’s sexual orientation or gender identity.

Misconduct that is based on any of these characteristics may form a hostile work environment.  For example, if a co-worker repeatedly makes derogatory remarks about the Mormon church to or in front of a Mormon employee, that could be illegal harassment or discrimination because the comments are being made about a protected classification: religion.  However, if the comments are about something that doesn’t fall into a protected class — such as the shoes a person wears — then it would not qualify as discrimination or harassment for the purposes of a lawsuit.

To qualify as a hostile work environment, the behavior has to be more than a one-time thing.  It has to be significant or severe and happen repeatedly over time — and management has to refuse to properly address it for a lawsuit to succeed.  This means that if you are experiencing harassment at work, you should report it to human resources.  If they do not take action to make the offending co-worker stop, then it could be the basis for a harassment lawsuit against the company.

A hostile work environment is rarely found when the alleged harassment was a one-time incident.  The conduct has to happen more than one or two times — and it has to be severe enough that a person’s ability to perform their job or progress in their career is impacted.  For example, if a worker won’t take a particular shift because she knows that the men on that shift will make comments about her body or her sex life if she is there, she may not get a promotion because she won’t work that shift.  That would be an example of a hostile work environment that impacted a person’s career.  But even if you are still promoted or receive a bonus, it can still be a hostile work environment if you cannot perform your job properly because of the harassment.  If you dread coming into work each day because you know that your co-workers will make racist remarks and you experience psychological effects from that stress, that could be the basis of a harassment suit.

If you believe that your work environment is hostile, the first thing that you should do is inform your employer and give them a chance to resolve it.  Be sure to document everything — the harassment, your notification to your boss, and any steps that they took to resolve it.  If nothing changes, contact PLBSH today at (800) 435-7542 or info@plbsh.com.  We’re experienced California harassment attorneys offering high-quality legal representation to anyone who has been harassed or who is experiencing a hostile work environment.  We offer free initial consultations for all prospective clients!