Yes, Men Can Be Sexually Harassed in the Workplace

Yes, Men Can Be Sexually Harassed in the Workplace

Home » Blog » Yes, Men Can Be Sexually Harassed in the Workplace

A growing number of men report being sexually harassed in the workplace, by both male and female co-workers and managers. 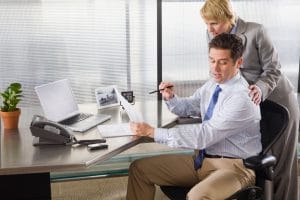 For most people, when they think of sexual harassment in the workplace, their mind immediately jumps to an image of a woman being harassed or propositioned by a male coworker, supervisor or boss.  While most cases of workplace sexual harassment do involve female victims, a growing number of cases of both men and women harassing male employees have emerged.

What Is Sexual Harassment?

Workplace sexual harassment is defined by the Equal Employment Opportunity Commission (EEOC) as “unwelcome sexual advances, requests for sexual favors, and other verbal or physical conduct of a sexual nature that explicitly or implicitly affect an individual’s employment, unreasonable interferes with an individual’s work performance; or creates an intimidating, hostile or offensive work environment.” . Examples of sexual harassment might be as straightforward as unwelcome touching, being pressured to go on romantic dates, or being called an offensive sexual nickname.  It can also include less obvious behavior, like making derogatory or offensive remarks about others, posting sexually explicit pictures or regular conversation of a sexual nature.

Can Men Be Sexually Harassed?

Why Many Men Don’t Report

Some men may not report their harassment or file a claim with the EEOC because they are afraid of being mocked by coworkers.  They may believe that men can’t truly be sexually harassed by a woman, or that being harassed by another man implicates their own sexuality.  They may fear being embarrassed if details of the harassment were leaked, particularly if they believe that they should be able to handle the issue themselves.  Whatever the reason, it is evident that many men are simply not filing claims of sexual harassment.

If you are a man who is being sexually harassed in the workplace, know that it is not acceptable and that there are ways to get help.   The first step is to contact a seasoned workplace harassment attorney who knows how to get results.  The lawyers of PLBSH have in-depth knowledge of workplace harassment laws and EEOC procedure, and can work with you to ensure that you are protected and get the compensation you deserve.  Contact our office today at (800) 435-7542 or info@plbsh.com to schedule an initial consultation about your workplace harassment case.