Yes, Men Can Be the Victims of Sexual Harassment in the Workplace

Yes, Men Can Be the Victims of Sexual Harassment in the Workplace

Home » Blog » Yes, Men Can Be the Victims of Sexual Harassment in the Workplace 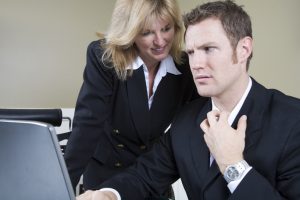 A woman being harassed or propositioned by a male coworker, supervisor, or employer is what comes to most people’s minds when they think of sexual harassment in the workplace. The majority of workplace sexual harassment charges involve female victims, however there has been an increase in the number of cases where both men and women have harassed male coworkers in recent years.

If you have been the victim of sexual harassment, contact PLBSH at (800) 435-7542 to work with a harassment attorney who can help.

What Is the Definition of Sexual Harassment?

The Equal Employment Opportunity Commission (EEOC) defines workplace sexual harassment as “unwelcome sexual advances, requests for sexual favors, and other verbal or physical conduct of a sexual nature that explicitly or implicitly affect an individual’s employment, unreasonable interferes with an individual’s work performance, or creates an intimidating, hostile, or offensive work environment.” Sexual harassment might take the form of anything as simple as unwanted touching, being encouraged to go on romantic dates, or being addressed with an inappropriate sexual moniker. The term can also refer to less visible behaviors such as making disparaging or insulting statements about people, publishing sexually explicit images on social media, or having regular sexual conversations with individuals.

Can Men Be Subjected to Sexual Harassment?

Despite the fact that women file the great majority of sexual harassment complaints with the Equal Employment Opportunity Commission, a rising number of males are submitting their own complaints. The Equal Employment Opportunity Commission received 6,822 complaints of sexual harassment in 2015. Men were the ones who filed the majority of the lawsuits, at 17.1 percent.

The Reasons Many Men Do Not Report

Some men may be frightened of being ridiculed by their coworkers if they disclose their harassment or file a complaint with the Equal Employment Opportunity Commission. They may assume that males cannot be sexually harassed by a woman in the traditional sense, or that being harassed by another guy implies that they are sexually harassed themselves.

They may be concerned about being humiliated if details of the harassment are made public, particularly if they think that they should be able to manage the situation on their own accord. No matter the cause, it is certain that a large number of men are choosing not to file sexual harassment lawsuits.

If you have been the victim of sexual harassment at work, whether you are a man or woman, please contact PLBSH at (800) 435-7542 to see how we can help.