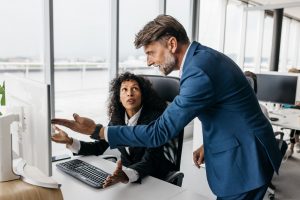 Employees are shielded against discrimination by both federal and state legislation. The Civil Rights Act of 1964 and the California Fair Employment and Housing Act are both referenced often in this legislation. These rules forbid employers from making judgments based on a person’s sexual orientation, age, marital status, ancestry, race, national origin, or gender.

They also ban discrimination based on military or veteran status. Discriminating against those who have a genetic predisposition to sickness is prohibited in California as well. State legislation prohibits the genetic testing of workers.

Additionally, there is a specific state legislation provision for “English only” rules. According to California law, an employer cannot forbid or restrict workers from speaking any language in the workplace unless it is necessary due to the nature of the business. If this is the case, then employees must be informed of the restrictions placed on language use as well as any associated penalties.

State rules on disability differ from federal Americans with Disabilities Act regulations. California law does not need a considerable limitation on living activities and has a broader view of physical impairments, mental disabilities, and medical disorders.

What does the EEOC do and who are they?

The Equal Employment Opportunity Commission has authority over allegations of workplace harassment (EEOC). All workplace harassment and discrimination complaints are investigated by this federal regulatory organization, which also offers recommendations to companies who they find to be infringing on local, state, and federal employment laws. In many instances, you must first submit a complaint with the EEOC and get the “all clear” before bringing a claim for workplace harassment against an employer.

How can you file a claim about workplace discrimination in California?

You can file a claim for employment discrimination in California with either the EEOC or the California Department of Fair Employment and Housing. Because of a “task sharing agreement,” these two organizations collaborate to look into and handle disputes. You don’t have to submit a claim to both agencies as long as you state that you wish to “cross file” with them.

Smaller employers who are not covered by federal law are covered by California anti-discrimination statutes. Instead of the EEOC, you should submit your claim with the DFEH if your employer has between 5 and 14 employees. The government agency only provides coverage to businesses with 15 or more employees. You may select either to file with if your company has at least this many employees.

We strongly recommend you contact an employment law attorney if you believe you have been the victim of workplace harassment and/or discrimination. Contact PLBSH at (800) 435-7542 now to get started.