You Have Legal Protections from Sexual Harassment in the Workplace: Learn What They Are

You Have Legal Protections from Sexual Harassment in the Workplace: Learn What They Are

Home » Blog » You Have Legal Protections from Sexual Harassment in the Workplace: Learn What They Are 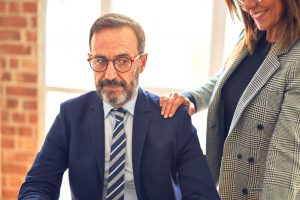 Numerous federal and state regulations prohibit sexual harassment in the workplace. The Fair Employment and Housing Act (FEHA) and Title VII of the Civil Rights Act of 1964 are the two primary origins of California’s legislation. While Title VII prevents discrimination on the basis of sex (including pregnancy), gender, or other protected classifications, the FEHA specifically bars sexual harassment at work. Employer responsibility for sexual harassment might come from breaking any of these regulations.

Keep reading to learn more about your legal protections. If you are a person who has been the victim of sexual harassment, contact PLBSH at (800) 435-7542 to speak to an employment law attorney.

Numerous different types of sexual harassment exist. Sexual harassment is a prohibited form of discrimination with significant repercussions under Title VII of the Civil Rights Act of 1964. Requests for sexual favors, unwanted sexual approaches, and verbal or physical acts that interfere with one’s ability to work are some examples of it. A hostile work environment is produced by sexual harassment, which interferes with a person’s ability to execute their job.

Quid pro quo harassment: what is it?

When an employer bases judgments about an employee’s position on that person’s readiness to cope with sexual harassment, this is known as “Quid Pro Quo” harassment. This can have an impact on your ability to get promotions, get new projects, or even stay your employment.

Quid pro quo harassment is defined by federal law as unwanted sexual approaches or other sexual behavior that an employer claims that addressing sexual misconduct is a requirement of employment, whether directly or tacitly, or involves the employer making judgments about work status is based on the rejection of sexual harassment.

What qualifies as a hostile workplace?

A claim for a hostile work environment falls under a more general category and is appropriate when inappropriate sexual behavior renders your workplace distasteful or scary. Requests for sexual favors, unwanted sexual approaches, and verbal or physical acts of a sexual character may be deemed harassment by the courts in the following circumstances: the behavior makes it difficult for the employee to perform their job duties or someone else’s activities cause a hostile or intimidating environment at work.

The frequency, length, and whether the harassment was perpetrated by a supervisor or a coworker can all be used by the courts to decide if the behavior was hostile.

When should I report sexual harassment?

Speaking out against sexual harassment can be challenging. Some victims come out weeks, months, or even years after the occurrence, while others never do. We strongly advise all sexual harassment victims and witnesses to come forward with their cases. Contact PLBSH at (800) 435-7542 now to request a consultation.